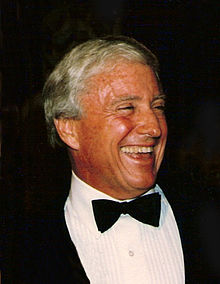 Born in 1925 and perhaps the richest actor of all time, Merv Griffin had his start not on the silver screen but on Radio. Starting first as a singer for San Francisco Sketchbook in 1944, he soon found roles as a supporting actor in such films as So This is Love (1953). It would seem however, that his best successes in entertainment were as a host and actor on the screens of America’s living rooms. His self titled show ran 21 seasons and earned 11 Emmy Awards, partly due to Griffins choice of guests which included a young Arnold Schwarzenegger. Like many of the richest individuals of the world, he also owned a multitude of businesses including at one time a record label and a small real estate empire at the time of his death in 2007. 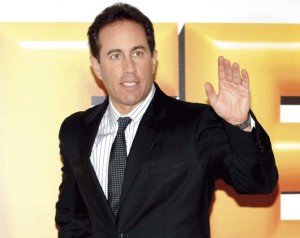 Best known for his “Show about nothing!” Jerry Seinfeld has proven to be immensely successful as both a comedian and actor. Starting as a stand-up comic and making erratic appearances on late night TV, he soon was given the reigns of his own show, Seinfeld. He soon became a household name for his work in front of the camera and inside the writing room. After 9 of arguably the most successful television seasons of all time, he decided it was time to return to his roots as a comic. He spent nearly the next decade doing so before going to the big screen as Barry B. Benson in the animated film, Bee Movie and appearing as himself in 2014’s Top Five, a comedy directed by Chris Rock.

Mr. Khan, also known as “King Khan” is the single most successful and decorated actor to come out of India’s Bollywood scene. With appearances on stage and screen, Khan has garnered over a dozen awards from his native India and also from the Government of France for his contributions to the art of Film. Starting with a starring role in the television series Fauji in 1989, he has maintained a steady stream of film and television appearances every year since. Alongside his constant work ethic as an actor, Khan also has majority ownership of a cricket team and Red Chili Entertainment studios.

Truly an acting giant and a menace to couches everywhere, Tom Cruise is a bit of a polarizing figure. Cruises career began with a small bit part with Endless Love, and within 5 years was among one of the most popular action film actors on the planet with his role in 1986’s Top Gun. Cruise continued with great commercial success with such films as Rain Man and the Mission Impossible series, which further demonstrated his ability to take on a variety of roles. Unfortunately, he has been the subject of more than a few controversies, starting with jumping on Oprah Winfrey’s couch, and currently due to his involvement with the Church of Scientology. This however, has not stopped Cruise from getting his own national holiday in Japan, which certainly cannot be said for any other actor that has made the list.

Famous for a powerful presence on both film and in the media, Gibson has been both a maypole of celebration and disgust. With his most notable contributions to film being his role as William Wallace in Braveheart and Detective Martin Riggs in the Lethal Weapon series, he had become a point of national pride both of his homeland of Australia and of Scotland. Gibson also has become a prominent director which such films as 2006’s Apocalypto and the controversial Passion of the Christ. Sadly for Gibson, with the latter came a downward social spiral for Gibson as more media attention was focused on his racial and religious beliefs as well as apparent alcoholism. At the time of writing it is still unclear whether he will return to the screen as an actor or a director any time soon, but he is sure to remain financially secure with a large number of real estate investments ranging in location from California to Costa Rica.

Author’s note: For positions 6-10, all actors have roughly the same net worth and thus are listed in no particular order.

If any actor has been able to develop a cult of personality among the youth, it’s been Johnny Depp. With widespread successes such as his menacing looking but child-like role in Edward Scissorhands to his quirky, rum laden part in the Pirates of the Carribean series, he has long been the cultural icon to what can be described as the “Hot Topic Counterculture” alongside his friend and frequent director Tim Burton. Alongside his film successes, he has also branched out to make a production company, Infinitum Nihil. Also, as if to further enforce his rock star appearance, has contributed to a sizable number of songs for album and movie alike. Most notable among these is the acoustic guitar work for the film Chocolat, and presence in a few songs made by Shane MacGowan, a previous member of The Pogues.

Best known for his Atlanta-based films and plays that feature his cross-dressed alter ego Madea, Perry is also a production powerhouse. He has partnered with such figures as Oprah Winfrey to create films and theater plays that portray and parody African American Culture in the American South that have not been shy about social and political issues. Alongside his own franchise of films, he has also played in a wide array of films from his role in Star Trek as Commandant Barnett and has been cast as Baxter Stockman in Teenage Mutant Ninja Turtles: Out of the Shadows. Alongside film accomplishments, Perry can also be credited with a mass of television shows on multiple networks including TBS and OWN which round out his portfolio quite nicely.

“Here’s Johnny!” Easily the most well known words from The Shining are a result of the manic process by which Jack Nicholson approaches his work. With a tenacity that shows through nearly half a century of film appearances, Nicholson has among one of the most diverse filmographies of the modern era, it comes as a surprise to find him this low on the list. With a public image more akin to characters he has recently played ( think Frank Costello of Scorsese’s 2006 film, The Departed) he seems fated to always carry a “bad boy” persona even as he reaches for age 80.

Rocky and Rambo, both archetypes of the quintessential “tough guy” are given their steely look and ripped physique thanks to Stallone. Besides these iconic characters and the films they exist within, Stallone also has nearly 50 other movie appearances, even including a cameo in the Bollywood film Kambakkht Ishq. With at least a handful of films still in the works at time of writing, it is certain Stallone will continue on as one of the wealthiest and hardest working actors in Hollywood.

Seen as the “Father Figure of the 80’s and 90’s”, Bill Cosby had once been a member of nearly every American household. As a result for nearly his entire career, he had retained a moniker of being a clean entertainer. Often appearing on children’s shows and PBS educational programs, he was a mainstay of family  friendly television. It may seem however, that this reputation may have been based on a very false image. It is now public knowledge that Mr. Cosby has been accused of Sexual Assault by no less than 50 women, which almost certainly bars him from major work in the field of entertainment again and has severed many business partnerships. As we see how these cases unfold, it may be the case that his current standing on this list may need to be revised. If you have more interest in the ongoing investigation, you can follow our article here.

SLAVERY OF THE MIND

DEFECTS OF THE EYE

Trump urged to back up claims his phones were tapped by...